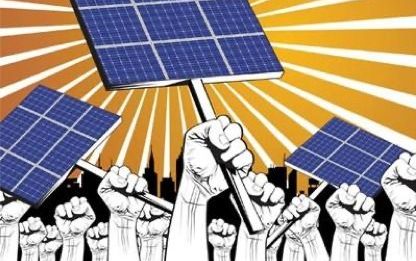 What will be the role of small-scale, local energy communities in the future energy system? Will the large-scale privatization continue, or will we go back to a more community-owned energy system? During our event emPOWERing Communities on March 5th, we have addressed this question with Lavinia Steinfort (Transnational Institute) and Siward Zomer (Energie Samen).

“We have seen over 2,400 deprivatization initiatives of energy systems in the last 20 years.” Lavinia researches local energy systems for the Transnational Institute, and does so globally. “Especially in Germany, where there are many local community banks, we see communities taking back control over their energy system. It is in these communities that the fastest growth of home-installed renewable energy systems is taking place. This not only cause a growth in renewable electricity share in these areas, but also brings the community together from a social cohesion point of view.” As consumers are also the producers, profit margins are not to big, and most of the profit is reinvested in the community. This causes a redistribution of power and wealth. In other countries, the movement is also visible: Among others India, Spain and the Netherlands see a large increase of community-owned energy systems. Lavinia strongly believes in the potential of these local energy systems in the future energy system: “By creating ownership, people feel involved – and this creates the support basis that is required for the significant changes we face as society.”

Siward Zomer, who is amongst other things director of ‘Energie Samen’ and founder of energy cooperative ‘De Windvogel’, is a first-hand Dutch practitioner of community-based energy systems. In his presentation he told about his journey in the cooperative sector and the development of this system in Europe. He compared the vision of energy cooperations with other current events, like the Brexit and the existence of parties like ”Forum voor Democratie”. “There exists this gut feeling in people, that moves them to take back control“. According to Siward, examples of Brexit and FvD are the negative results of this feeling, and energy cooperation is the positive result from this.

Being chairman of the Windvogel, Siward saw this kitchen-table-platform as a way to use the gut feeling of many to take back control over the Energy system. Nowadays more than 85.000 people are a member of the Renewable Energy Companies. Siward showed us examples of extensive collaboration between utility companies and energy cooperations where good results were achieved. Engineering and financial matters were taken care of by the companies, and support and political issues were pushed by the cooperation.

A short debate in small groups aimed to link the two discussions together. One of the key discussion points was the question whether we have sufficient time to focus on developing these community-based energy systems, if we consider the urgency of the climate crisis. As building those communities requires long local democratic processes, simply installing a large, central renewable electricity production system would be more time-efficient. Most likely, both will go hand-in-hand in our future energy system: local communities often do not have the scale to be self-supporting throughout the year, and are also unable to provide sufficient energy for large offices and industries. They do, however, have a very strong role in creating awareness and ownership around the issue of energy. Empowering communities can therefore play a significant role in making the energy transition a success.

After a small break it is time to gather again and learn about energy democracy. This topic is already relevant for quite some decades, but now with the compounding potential of decentralisation and the increased new interest of the public, this topic is very pertinent. Experts claim that the democratisation of the energy systems would lead to more and better distribution of public money, wealth and power.

Lavinia Steinfort and Siward Zomer will teach us about their perspective on the topic.

Lavinia Steinfort is a political geographer and activist. As a researcher at the Transnational Institute (TNI) she is working on public alternatives such as (re)municipalisation of public services, a just transition towards energy democracy and transforming finance for the 99%. She will show us examples of communities that successfully became in charge of their energy system and explain how it changed the communities in general.

Siward Zomer is chairman of the cooperative association ‘De Windvogel’ and cooperative director of ‘Energie Samen’. He will explain how the community energy sector developed in Europe . Next to that he will explain the difference in dynamics of large technical developments when the community is co-owner instead of just a customer of the energy system.

Note: The event is free for our members and first-timers (as a non-member your first event with YES-DC is free to attend).