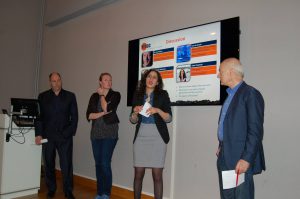 In December 2015 a new Conference of Parties (CoP) will be held in Paris, with as objective to achieve a legally binding and universal agreement on climate from all the nations of the world. This 2015 agreement will have to bring together the current patchwork of binding and non-binding arrangements under the UN climate convention into a single treaty. But is there a sense of urgency? With a new record of 75 participants we discussed the climate dilemma and the road to Paris in a birds eye view.

A few decades are left in the remaining emission budget.

Leo Meyer (IPCC) represented the climate sciences and the process and politics of achieving consensus on the existing knowledge. As the compilation of an IPCC assessment report both includes researchers and officials of 195 countries, it generally leads to a very general text as a lot of countries are pushing in different directions. One message is clear and not contested: we have to reduce our greenhouse gas emissions as we have consumed 2/3th of our emission budget and are expected to use up the remaining 1/3th in the next coming 20 years.

Closing the gap: a double challenge.

Annemiek Admiraal (PBL) continued with a dirty kitchen analogy, describing climate change as a tragedy of the commons that no one wants to clean up. With current effort we are not on track with the emission reductions that we need to limit temperature increase to the negotiated 2 degrees. As the country pledges have not been met, leaving us with an enormous emission gap anyways, the challenge for the UNFCCC Paris gathering is clear. The question is; are the reinforced and renewed pledges (so called ‘INDCs’) up for the job?

After this we move to the climate negotiation room with Ivo de Zwaan (min I&M and head of the Dutch delegacy of the UNFCCC). The main focus for Paris is to establish a legal instrument that is applicable to all (major economies in particular) and enforced by 2020. However this task is more challenging in a setting where the smallest detail can lead to discussion and consensus is scarce. The INDCs might not add up for 2C but the agreement is a basis for an ambitious spiraling up for ambition.

Climate change is a time bomb, but not all is lost

Afterwards Faiza Oulahsen (Greenpeace) was allowed to respond to the unfolded storyline – 2C is 50% chance of bending catastrophic change which is still a gamble for which we have to hope for the best. The science is clear about the available options yet agreements have shown to never be really strong. The mood is changing throughout the world, with multiple bottom-up initiatives (ABP fossil free, climate march, divestment etc) being initiated. The COP in Paris might not bring us what we want but it does not mean the battle is lost.

The discussion evolved into an animated conversation between both the audience and the speakers but also the speakers amongst themselves. Although we should not discard our current achievements as insignificant, much work is still to be done. Public debate and bottom-up issueing will be increasingly more important in shaping current policies – as well as economic benefits that cannot be quantified in monetary values (such as health and biodiversity).

Presentations from the event can be found here.